On Posted on May 5, 2015 by Elizabeth Neukirch to Latest News, News 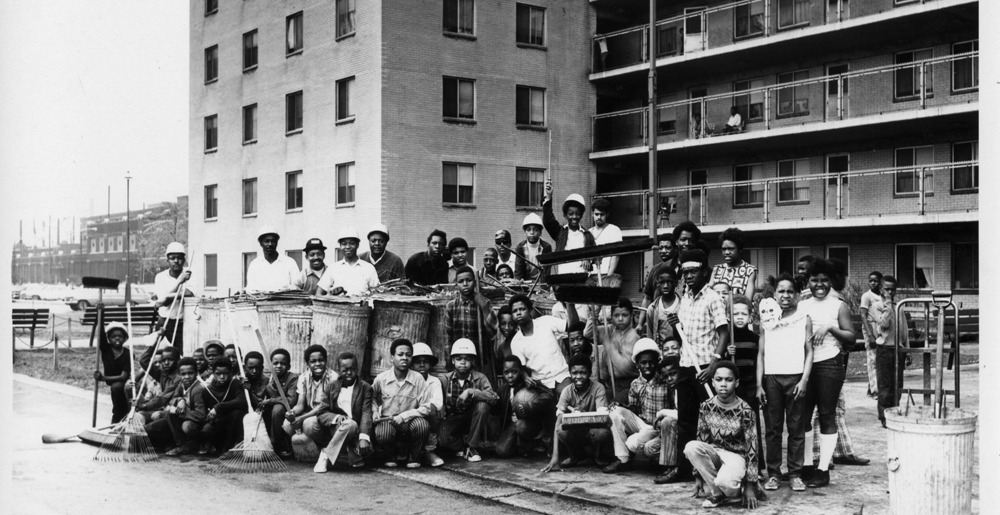 May 5, 2015 (CHICAGO, IL)—American Theater Company (ATC) announces a special community tour of The Project(s), a world premiere documentary play about the history of public housing in Chicago, to the Cabrini-Green and Wentworth Gardens neighborhoods this month. Free public performances will be held at Edward Jenner Elementary Academy of the Arts on May 17 at 6 p.m. and Wentworth Gardens Field house on May 24 at 5 p.m. Seating for both performances will be available on a first come, first served basis.

Additionally, a select number of free tickets are available for all performances during the regular run at American Theater Company (1909 W. Byron Street, Chicago) now through May 24 for all former and current public housing residents. Interested residents can call ATC at 773-409-4125 for more details. Single tickets are $48 and are available at www.atcweb.org or 773-409-4125.

“We wanted this story to return to the places where it was born,” says ATC Artistic Director PJ Paparelli. “I am very grateful to the generous individuals who are making this tour possible.”

The Project(s) received two development opportunities at the Orchard Project, a national new play development retreat in New York; a Jentel Artist Residency in Wyoming, and a MacArthur International Connections Fund grant, through which Paparelli travelled to the United Kingdom to workshop the play at Citizens Theatre in Glasgow and the Lyric Hammersmith in London, in addition to interviewing public housing residents and city officials in Scotland. ATC also partnered with Howard University in Washington, DC, for a five-week workshop integrating stepping and body percussion.

Remaining performance schedule for The Project(s):

The Project(s) is supported by a generous grant from The Chicago Community Trust and the John D. and Catherine T. MacArthur Foundation.

The Project(s) was developed, in part, with assistance from The Orchard Project, a program of The Exchange, and through residencies with the Jentel Artists Residency Program; Citizens Theatre Company, Glasgow, Scotland; Sheridan College & the Wyoming Theater Festival; and the Howard University Department of Theatre Arts.

PJ Paparelli (Director/Co-Writer/Artistic Director) is in his eighth season as Artistic Director of American Theater Company. He last directed ATC’s critically acclaimed world premiere of The Humans. Additional ATC directing credits include Hair, Sons of the Prophet, columbinus (Five Jeff Nominations), The Catholic Rep: Doubt & Agnes of God, The Original Grease (Jeff Award for Best Musical), Escape, The Amish Project, Distracted, Yeast Nation (the new musical from the writers of Urinetown), Hedwig and the Angry Inch, The Black & White Rep: True West (Caucasian & African American casts), and the regional premiere of Speech & Debate (Jeff Nomination). His ATC writing credits include columbinus and Every Year is This Year, which was co-written by Maria Irene Fornes for ATC’s The Silver Project.

Joshua Jaeger (Co-Writer) served as the 2012 Artistic Projects Fellow at American Theater Company. During that time, he co-produced the 10X10 and Big Shoulders festivals of new short plays, and sat on ATC’s Literary Circle. He assisted in producing Steppenwolf Theatre Company’s inaugural After Party, a multi-disciplinary late-night series presented in tandem with the annual Garage Rep. Joshua has dramaturged and assistant directed for TimeLine Theatre Company, Victory Gardens and Chicago Dramatists. Alongside his work in theatre, Joshua performs as a percussionist with the international touring artist Angel Olsen. His drumming may be heard on her current release, “Burn Your Fire for No Witness.”