On Posted on June 10, 2015 by Elizabeth Neukirch to Latest News, News 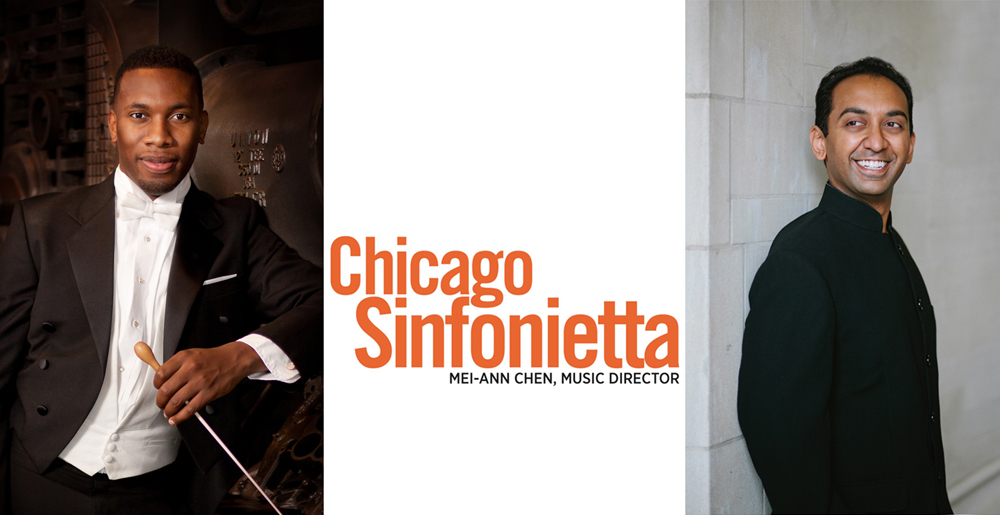 Chicago Sinfonietta announces next class of Orchestra and Conducting Fellows

CHICAGO (June 10, 2015) – The Chicago Sinfonietta, the nation’s most diverse orchestra, is proud to announce that the first graduates of its Project Inclusion Conducting Fellowship – Roderick Cox and Sameer Patel – have been hired as Assistant Conductors at the Minnesota Orchestra and San Diego Symphony, respectively.

Launched in 2014 as an outgrowth of the orchestra’s successful orchestra fellowship program and funded by grants from the Andrew M. Mellon Foundation, the Chicago Community Trust, and the Joyce Foundation, the Project Inclusion Conducting Fellowship is Chicago Sinfonietta’s groundbreaking mentorship program that aims to foster the development of conductors of diverse backgrounds who are on the verge of professional careers. Under the tutelage of Chicago Sinfonietta’s Music Director Mei-Ann Chen, the Fellows are given opportunities to conduct live ensembles through partnerships with leading Chicago classical music organizations and educational institutions in addition to comprehensive training in working with boards of directors, understanding orchestra finances, fundraising, marketing, season program development, audition and interview preparation, and working with union musicians to prepare for success as a conductor and music director.

“We at the Sinfonietta consider it our responsibility to advance inclusion and eliminate institutional bias in a field where programs addressing diversity are scarce,” said music director Mei-Ann Chen. “The Project Inclusion Conducting Fellowship provides professional development opportunities to conductors of diverse racial, ethnic, socioeconomic and geographic backgrounds to help prepare them to land important staff positions with American professional orchestras.”

The Conducting Fellowship is an outgrowth of the Sinfonietta’s original and ongoing Project Inclusion Orchestra Fellowship program, which since its inception in 2008, has prepared over 30 early career, diverse orchestra musicians.   Among the success stories: four of the graduates secured tenured positions in several professional orchestras; eight former fellows are professional freelance musicians performing in both orchestral and ensemble settings; and three more have pursued full-time careers in music education.  In 2013, ChIcago’s Grant Park Music Festival became the first outside orchestra to partner with the Sinfonietta in offering this industry-leading professional development program and now has had twelve musicians participate in Project Inclusion over three seasons.

Added Jim Hirsch, Chicago Sinfonietta executive director: “Sinfonietta Founder Paul Freeman championed diverse musicians and conductors throughout his 50-year career. The Project Inclusion Orchestra and Conductor Fellowship programs are our way of honoring Paul’s work, providing an institutional framework for these programs so that they are effective and sustainable, and most of all, to help U.S. orchestras reflect the diversity of the communities they serve by preparing great candidates to compete for, and win positions.”

The Fellows in both programs are chosen through a competitive audition process and will participate with Chicago Sinfonietta starting September 2015 through May 2016.

“Many talented conductors applied for this position,” said Minnesota Orchestra Music Director Osmo Vänskä. “Roderick emerged as a very musical conductor and demonstrated a great ability to connect from the podium with musicians and audiences. We are very happy to welcome him to Minnesota.”

Sameer Patel begins his position as Assistant Conductor with the San Diego Symphony this summer, having been selected over 167 applications from all over the world for the position. Prior to his Chicago Sinfonietta fellowship experience, Patel held a prestigious conducting fellowship with the Boston Philharmonic, was selected by the League of American Orchestras for the Bruno Walter National Conductor Preview with the Jacksonville Symphony Orchestra, and has held engagements with the Toronto Symphony, Detroit Symphony, Knoxville Symphony, Toledo Symphony, Phoenix Symphony, Pacific Symphony, Fort Wayne Philharmonic, Alabama Symphony, and the Leipzieger Sinfonieorchester in Germany.

Said Patel of his new engagement: “I am thrilled to join the San Diego Symphony as assistant conductor, and I look forward to serving both the organization and the San Diego community. “One of San Diego’s crown jewels is its world-class orchestra, which is at the heart of the city’s vibrant cultural life. I look forward to meeting the San Diego audiences and the Symphony’s supporters and donors and to working with Jahja Ling, the musicians and staff.”

Project Inclusion is Chicago Sinfonietta’s groundbreaking mentoring program for musicians and conductors of diverse backgrounds who are pursuing careers as professional classical musicians and music directors. It is designed to help eliminate the institutional bias that is a barrier to participation for many musicians due to factors such as ethnicity, race, and socio-economic status. The two-year fellowship includes full salary for all rehearsals and performances, one-on-one mentoring from senior members of the orchestra, performance opportunities with Chicago Sinfonietta, and guidance in securing work after the fellowship has been completed.

Project Inclusion is grateful to its generous sponsors including the Andrew W. Mellon Foundation, Chicago Community Trust, the Joyce Foundation, and the South Side Friends of the Chicago Sinfonietta. The Sinfonietta is also grateful to its partners including Grant Park Music Festival, Chicago College of the Performing Arts at Roosevelt University, DePaul School of Music, the Northwestern University School of Music, and others.

The Chicago Sinfonietta is a professional orchestra that forms unique cultural connections through the universal language of symphonic music. For over 28 years, the Sinfonietta has pushed artistic and social boundaries to provide an alternative way of hearing, seeing and thinking about a symphony orchestra. Each concert experience fuses inventive new works with classical masterworks from a diverse array of voices to entertain, transform and inspire. The Chicago Sinfonietta performs five subscription concerts in both downtown Chicago at Symphony Center and in Naperville at Wentz Concert Hall. The Sinfonietta has a proud history of having enriched the cultural, educational and social quality of life in Chicago under the guidance of Founding Music Director Paul Freeman. Mei-Ann Chen succeeded Paul Freeman as the Chicago Sinfonietta’s Music Director beginning with the 2011-12 season. In 2012 the Sinfonietta was honored with two national awards for excellence from the League of American Orchestras, one for adventurous programming and one recognizing Maestro Chen with the Helen M. Thompson Award for an Emerging Music Director.