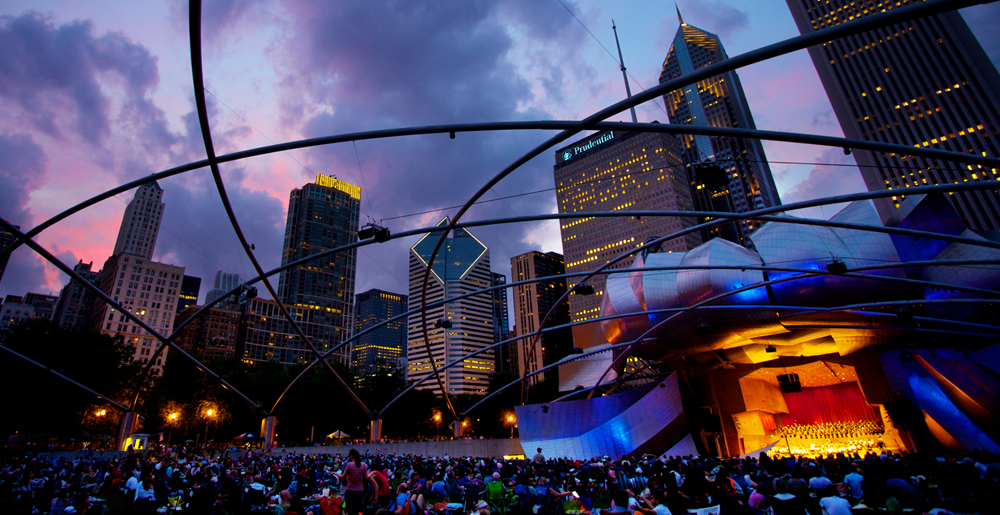 Thirty spectacular concerts at the Jay Pritzker Pavilion, including a week-long collaboration with the MacArthur Foundation, led by conductor Marin Alsop; and a world premiere commission by American composer Michael Gandolfi

All concerts are free and most will take place on Wednesday and Friday evenings at 6:30 p.m., and Saturday evenings at 7:30 p.m. (a complete schedule follows).

The Grant Park Music Festival is presented by the Grant Park Orchestral Association with key support from the Chicago Park District and the Chicago Department of Cultural Affairs and Special Events. BMO Harris Bank is proud to be the season sponsor of the Festival for the third year.

The Grant Park Music Festival renews its commitment this season to its comprehensive initiative aimed to increase music education and engagement opportunities for audiences of all ages. Working with the Chicago Park District and Mayor Emanuel’s Night Out in the Parks program, Festival Connect will continue to bring a focus to the neighborhoods with performances by the Grant Park Orchestra, the Grant Park Chorus, Project Inclusion and the Apprentice Chorale.

Memberships to the Grant Park Music Festival 2016 season are available beginning January 12 and include reserved access for every Festival concert, along with exclusive benefits like access to concert receptions and discounts on parking and restaurants. The Festival also offers packages with nine and 13 concerts that include reserved seats with complimentary exchange privileges. For the first time, the Festival will offer patrons the opportunity to choose their own eight or 12 concert series. Memberships begin at $169.

In addition, every Grant Park Music Festival concert has seats that are free and open to the public. Seats in the Seating Bowl and on the Great Lawn are available on a first-come, first-served basis.

Carlos Kalmar has been Principal Conductor of the Grant Park Music Festival since 2000, and in 2011 was named Artistic Director and Principal Conductor. Under Kalmar’s leadership, the Festival has become one of the world’s preeminent classical music festivals, and he has played a central role in shaping its artistic vision.

In addition to his role at the Grant Park Music Festival, Carlos Kalmar is the Music Director of the Oregon Symphony, a position he has held since 2003, and Principal Conductor of the Orquestra Sinfónica de Radio Televisión Española in Madrid. He has served in artistic leadership roles for the Hamburg Symphony Orchestra, the Stuttgart Philharmonic Orchestra, the Opera House and Philharmonic Orchestra in Dessau, Germany and the Tonkünstler Orchestra in Vienna, while also traveling the world as a guest conductor appearing with some of the world’s most important orchestras. Kalmar has made six recordings with the Grant Park Orchestra.

Christopher Bell has served as Chorus Director of the Grant Park Chorus since 2001, and led the Chorus through its 50th anniversary in 2012 with a series of special events, including the release of its first ever a cappella recording entitled Songs of Smaller Creatures and other American Choral Works, available on Cedille Records.