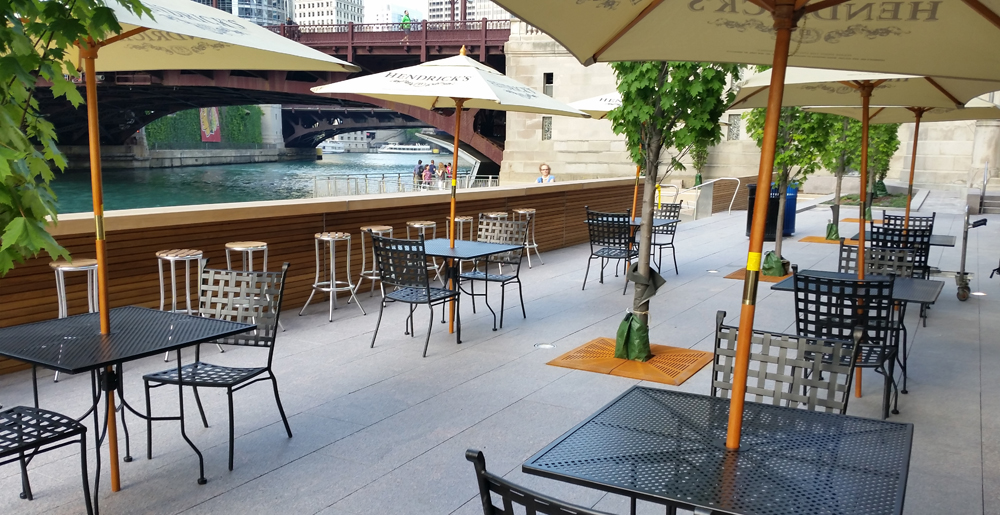 The Riverwalk menu features some of the most popular salads, sandwiches and soups from City Winery Chicago’s distinctive small-plates sharing-and-pairing concept menu, plus some new items unique to the Riverwalk, including family-friendly options. City Winery Chicago at the Riverwalk will feature six house-made wines – sourced from vineyards in California, Oregon, Washington, Argentina and Chile – on tap, in addition to bottles of bubbly, Goose Island beer and a selection of seasonal cocktails. City Winery Chicago has designated a “Riverwalk Red” (blend) that will be available all summer long.

“City Winery is excited to enjoy our first summer on the Chicago Riverwalk,” said City Winery Chicago general manager Nathan Holgate. “We can’t wait to bring what we do in the West Loop with food and wine to the Loop, reaching a whole new audience of locals, downtown workers and visitors. The Marina area also offers one of the first touch-and-go areas for private boaters, creating a new, unique space for local boaters and visitors to tie up along the river’s edge and enjoy a taste of City Winery Chicago.”

Consistent with urban City Winery locations in New York and Nashville as well as the Napa location, the City Winery Chicago at the Riverwalk décor evokes the romance of being in wine country with a warm, inviting decor using wood and actual wine barrels to dress up the space and bars made from barrel staves.
The Chicago Department of Transportation (CDOT) has been working on the Chicago Riverwalk since East-West Wacker Drive reconstruction began in the 1990s. The roadway was reconfigured to accommodate the expansion of the Riverwalk to promote a pedestrian walkway and activate the space as a public amenity. The East-West Wacker Project included utility build-outs for the future Riverwalk build-out for the entire length from Michigan to Lake Street.
Opened in 2012, City Winery Chicago is a fully operational winery, restaurant with outdoor patio, concert hall and private event space located in the heart of the West Loop at 1200 W. Randolph, in the historic urban Fulton Market district. Once a refrigerated food distribution warehouse, the 1911 building has been transformed into a contemporary 33,000 square foot haven for those passionate about wine, music and culinary arts. The décor evokes the romance of being in wine country, from the exposed stainless steel fermenting tanks and French oak barrels, to the aroma of fermenting grapes. Chicago’s only fully operation winery has produced dozens of in-house wines sourced from vineyards in California, Oregon, Washington, Argentina and Chile, including a Wine Enthusiast 90-point 2012 Bien Nacido Vineyard Reserve pinot noir. With more than 400 unique producers from around the world City Winery is recognized with a 2014 Best of Award of Excellence “for having one of the most outstanding restaurant wine lists in the world” by Wine Spectator. The globally inspired, locally sourced, wine-focused food menu is conceived for pairing and sharing. The concert hall accommodates up to 300 guests, all seated at tables with complete beverage and dining service, ensuring a comfortable “listening room” experience enhanced by a state-of-the-art Meyer Sound system. Riedel is the official and exclusive provider of glassware, showing City Winery’s commitment to enjoying quality wine in a quality vessel. American Airlines is the Official Airline and Virgin Hotels Chicago is the Official Hotel of City Winery. For more information, please visit www.citywinery.com .