On Posted on March 10, 2015 by Elizabeth Neukirch to Latest News, News 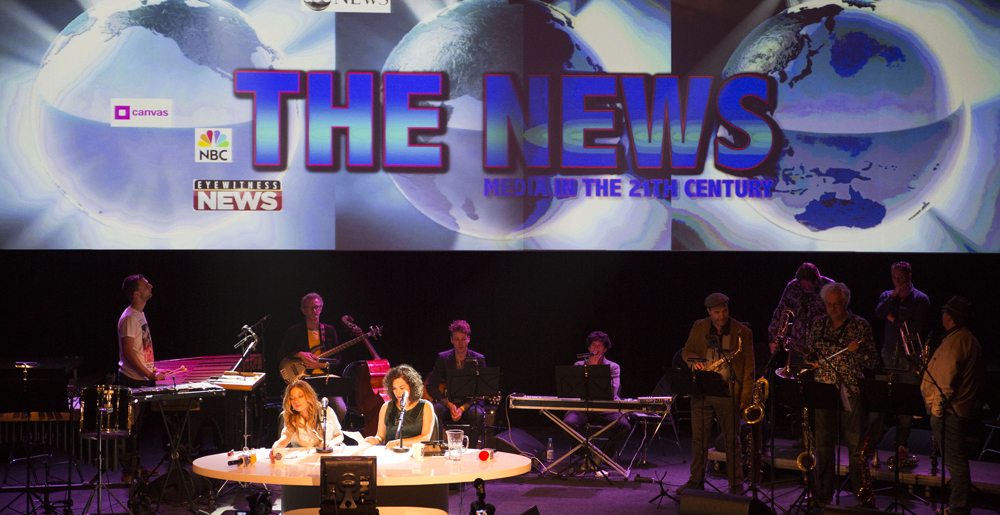 ONE PERFORMANCE ONLY, TUESDAY, APRIL 21, AT THALIA HALL

Updated since the 2012 performance, Fulcrum Point makes its New York debut at the Metropolitan Museum of Art with NY premiere of THE NEWS just days prior to Chicago

CHICAGO – Fulcrum Point New Music Project, Chicago’s leader in New Art Music led by Stephen Burns, proudly presents the 2015 edition of JacobTV’s satiric “pop opera” THE NEWS in one performance only at Pilsen’s new Thalia Hall, 1807 S. Allport Street, Tuesday, April 21, at 8 pm. All tickets for THE NEWS are $26 and are available online at thaliahallchicago.org or by calling (312) 526-3851.

From Putin to Palin and Netanyahu to Newtown, THE NEWS is a fast-paced, 90-minute pop opera in which current international broadcast news clips about politics, economy, religion, war and peace, showbiz and global warming are the stars.  Brilliant “avant pop” Dutch composer JacobTV uses speech grooves and melodies from the videos in a cool fusion of classical, world, blues, jazz, rock, and pop. His original score is performed by two singing “news anchors” – New York-based Loire (rhythm vocalist) and Amsterdam-based Nora Fischer (mezzo soprano) – and a 9-piece Fulcrum Point funk band. Click here for a sampling.

“For more than 15 years, Fulcrum Point New Music Project has been pushing the boundaries of the classical musical experience through dynamic live performances with innovative programming and creative collaborations such as THE NEWS. In 2009, when Jacob TV was a visiting composer with Fulcrum Point, he walked by the ABC TV studios and saw all the video monitors with various programs broadcasting and proclaimed, ‘My God, this is like an opera!’ and decided then and there to write THE NEWS. Stephen Burns made him promise to give Fulcrum Point the premiere. It has been a close and fruitful relationship ever since resulting in several works.”

Fulcrum Point performed the World Premiere of THE NEWS at The Andy Warhol Museum (Pittsburgh, PA) in spring 2012; an equally enthusiastic response is expected when Fulcrum Point performs the New York premiere of the multi-media piece at the Metropolitan Museum of Art April 17 & 18, followed by the Chicago return.

For more information on Fulcrum Point and its programs visit www.fulcrumpoint.org.