On Posted on June 24, 2015 by Elizabeth Neukirch to Latest News, News 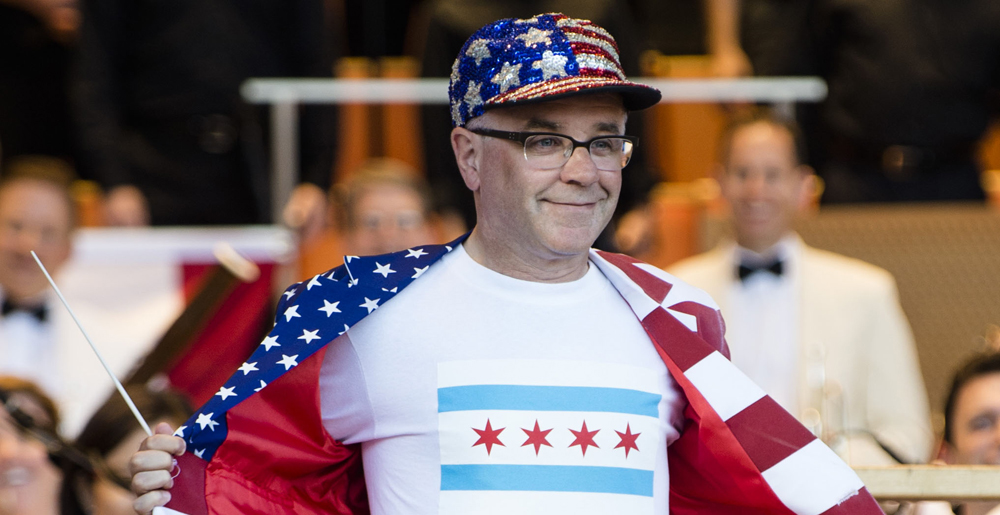 To celebrate the nation’s 239th birthday, more than 11,000 Chicagoans and visitors are expected to snag a seat down front or pack a picnic on the Great Lawn and take in the sounds of Sousa’s Stars and Stripes Forever. Audiences have come to anticipate Christopher Bell’s signature flashy outfits of red, white and blue for the occasion, including starred and striped vests, kilts and platform shoes. After the conclusion of the concert at 9:30pm, the Navy Pier fireworks are visible along the lakefront, setting the scene for the ultimate Independence Day picnic under the stars.

For the first year, the Grant Park Music Festival offers single night passes for reserved seats to any Festival concert at the Pritzker Pavilion. One-night passes, starting at $25, are available by calling 312-742-7647 or going online at gpmf.org to select seats.

The entire Independence Day Salute can also be enjoyed on Wednesday, July 1, 6:30pm at the South Shore Cultural Center, 7059 S. South Shore Drive, where a limited number of free seats are available on a first-come, first-served basis. This earlier performance is part of the Chicago Park District’s Night Out in the Parks program.

The Grant Park Orchestra’s open lunchtime rehearsal of the Independence Day Salute takes place Tuesday, June 30, 11 a.m.-1:30 p.m. in Millennium Park. Audiences are welcome to sit in the Pavilion Seating Bowl during rehearsal, and Festival docents will be on site to talk about the week’s concerts during rehearsal breaks.

The July 4 concert will be broadcast live on 98.7WFMT, Chicago’s classical and fine arts radio station, and also online at wfmt.com/streaming.

The Grant Park Music Festival, the nation’s only free, summer-long outdoor classical music series of its kind, continues through August 22 at the Festival’s home in Millennium Park’s Jay Pritzker Pavilion, with additional performances at the South Shore Cultural Center, the Columbus Park Refectory and the Harris Theatre. With exceptions during the neighboring Taste of Chicago, Festival concerts are Wednesdays and Fridays at 6:30 p.m. and Saturdays at 7:30 p.m. For more information about the Grant Park Music Festival, including membership, one-night passes and group seating, visit gpmf.org or call 312-742-7647. For additional information, visit the Grant Park Music Festival Facebook page or follow the Festival on Twitter @gpmf.

The Grant Park Music Festival gratefully acknowledges the generous support from its 2015 sponsors: BMO Harris Bank, Season Sponsor; Fairmont Chicago Millennium Park, Official Hotel; Macy’s, Official Picnic Sponsor; and ComEd, Concert Sponsor. The Grant Park Music Festival is supported in part by an award from the National Endowment for the Arts, and partially supported by a grant from the Illinois Arts Council Agency.

Christopher Bell has served as Chorus Director of the Grant Park Chorus since 2001, and led the Chorus through its 50th anniversary in 2012 with a series of special events, including the release of its first ever a cappella recording entitled Songs of Smaller Creatures and other American Choral Works, available on Cedille Records. He works extensively with the Grant Park Apprentice Chorale, comprising students from the Roosevelt University Chicago College of Performing Arts and DePaul University School of Music who have been hand-picked by Bell, and he conducts the Festival’s annual Independence Day Salute.

In addition to working with the Grant Park Music Festival, Bell is the Chorus Master of the Edinburgh Festival Chorus, the Royal Scottish National Orchestra Junior Chorus, and the Belfast Philharmonic Choir. Largely responsible for the formation of the National Youth Choir of Scotland (NYCoS) in 1996, he has been its Artistic Director ever since. In 2012, Bell was awarded an honorary Doctor of Music degree from the Royal Conservatoire of Scotland in Glasgow for his contributions to music in Scotland. He is the recipient of the 2013 Michael Korn Founders Award given by Chorus America, established in 1978 to honor an individual with a lifetime of significant contributions to the professional choral art.

Pianist Terrence Wilson has established a reputation as one of today’s most gifted instrumentalists. He has appeared with many prestigious ensembles, including the orchestras of Atlanta, Baltimore, Cincinnati, Dallas, Detroit, Houston, Cleveland, Washington, D.C., San Francisco, St. Louis, St. Paul, Minnesota, Philadelphia, New Jersey, Indianapolis, Winston-Salem, Grand Rapids and Modesto. Abroad, he has performed with the Lausanne Chamber Orchestra, Malaysian Philharmonic and Orquestra Sinfonica do Estado de Minas Gerais in Brazil. Terrence Wilson is also active as a recitalist, having made his New York City recital debut at the 92nd Street Y and his Washington, D.C. recital debut at the Kennedy Center. In Europe he has given recitals at the Verbier Festival in Switzerland and the Louvre in Paris. In the United States, he has performed recitals at the Ravinia Festival, Caramoor Festival, San Francisco’s Herbst Theatre and La Jolla Chamber Music Society. An active chamber musician, Mr. Wilson performs regularly with the Ritz Chamber Players. Terrence Wilson has also appeared at the Mann Music Center and Blossom Festival, Tanglewood and Wolf Trap in recitals, concertos and chamber music. He has received numerous awards and prizes, including the SONY ES Award for Musical Excellence, an Avery Fisher Career Grant and the Juilliard Petschek Award. He has also been featured on several radio and television broadcasts, including NPR’s Performance Today, WQXR radio in New York and programs on the BRAVO Network, Arts & Entertainment Network and public television. In 2010, Wilson was nominated for a Grammy Award for his recording of Michael Daugherty’s Deus ex Machina for Piano and Orchestra with the Nashville Symphony, conducted by Giancarlo Guerrero. Terrence Wilson is a graduate of the Juilliard School, where he studied with Yoheved Kaplinsky. A native of the Bronx, he resides in Montclair, New Jersey.