On Posted on July 24, 2015 by Elizabeth Neukirch to Latest News, News 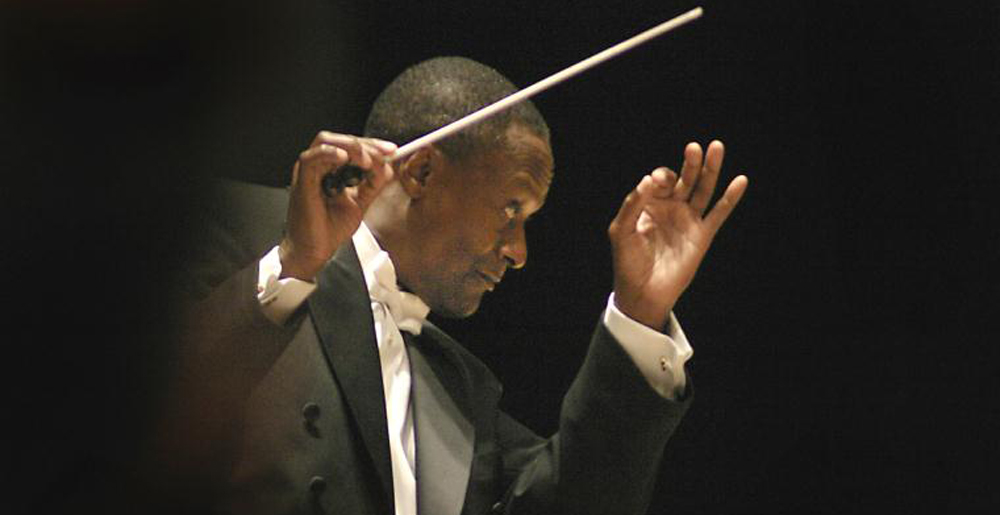 Open lunchtime rehearsals of for this concert take place Tuesday and Wednesday, July 28 and 29, 11 a.m.-1:30 p.m. Audiences are welcome to sit in the Pavilion Seating Bowl during rehearsals, and Festival docents will be on site to talk about the concert during rehearsal breaks.

Thomas Wilkins conducts the Sunday Symphony by the prolific William Grant Still, the “Dean of all African-American composers.” The evening concludes with Dvořák‘s beautiful large-scale work, his Sixth Symphony, which recalls the Czech folksongs of his native Bohemia.

Thomas Wilkins is Music Director of the Omaha Symphony and Principal Conductor of the Hollywood Bowl Orchestra. He also holds the Germeshausen Family and Youth Concert Conductor Chair with the Boston Symphony. Mr. Wilkins’ past positions have included Resident Conductor of the Detroit Symphony and Florida Orchestra and Associate Conductor of the Richmond (VA) Symphony. He has also served on the faculties of North Park University in Chicago, University of Tennessee in Chattanooga, and Virginia Commonwealth University in Richmond. He has led major orchestras throughout the United States, including those of Cleveland, Atlanta, Rochester, Cincinnati, Columbus, Dallas, Houston, Buffalo, Baltimore, New Mexico, Utah and Washington, D.C., and continues to make frequent appearances with the Philadelphia Orchestra, Indianapolis Symphony, San Diego Symphony and New Jersey Symphony. Last season Mr. Wilkins returned to the National Symphony Orchestra for a two-week festival of American music and dance, as well as a collaboration with world renowned cellist Yo-Yo Ma at Wolf Trap, the NSO’s summer home. He has participated on several boards of directors, including the Greater Omaha Chamber of Commerce, Charles Drew Health Center (Omaha), Center Against Spouse Abuse in Tampa Bay, and Museum of Fine Arts and Academy Preparatory Center, both in St. Petersburg. Currently he serves as chairman of the board for the Raymond James Charitable Endowment Fund and as national ambassador for the non-profit World Pediatric Project headquartered in Richmond, which provides children throughout Central America and the Caribbean with critical surgical and diagnostic care. A native of Norfolk, Virginia, Thomas Wilkins is a graduate of the Shenandoah Conservatory and New England Conservatory. The Boston Globe named him among the “Best People and Ideas of 2011” and in 2014 he received the prestigious “Outstanding Artist Award” at the Nebraska Governor’s Arts Awards.

William Grant Still, whom Nicolas Slonimsky in his authoritative Baker’s Biographical Dictionary of Musicians called “The Dean of Afro-American Composers,” was born in Woodville, Mississippi on May 11, 1895. His father, the town bandmaster and a music teacher at Alabama A&M, died when the boy was an infant, and the family moved to Little Rock, Arkansas, where his mother, a graduate of Atlanta University, taught high school. In Little Rock, she married an opera buff and he introduced young William to the great voices of the day on records and encouraged his interest in playing the violin. At the age of 16, Still matriculated as a medical student at Wilberforce University in Ohio, but he soon switched to music. He taught himself to play the reed instruments and left school to perform in dance bands in the Columbus area and work for a brief period as an arranger for the great blues writer W.C. Handy. He returned to Wilberforce, graduated in 1915, married later that year, and then resumed playing in dance and theater orchestras.

In 1917, Still entered Oberlin College, but he interrupted his studies the following year to serve in the Navy during World War I, first as a mess attendant and later as a violinist in officers’ clubs. He went back to Oberlin after his service duty and stayed there until 1921, when he moved to New York to join the orchestra of the Noble Sissle–Eubie Blake revue Shuffle Along as an oboist. While on tour in Boston with the show, Still studied with George Chadwick, then President of the New England Conservatory, who was so impressed with his talent that he provided his lessons free of charge. Back in New York, Still studied with Edgard Varèse and ran the Black Swan Recording Company for a period in the mid-1920s. He tried composing in Varèse’s modernistic idiom, but soon abandoned that dissonant style in favor of a more traditional manner.

Still’s work was recognized as early as 1928, when he received the Harmon Award for the most significant contribution to black culture in America. His Afro-American Symphony of 1930 was premiered by Howard Hanson and the Rochester Philharmonic (the first such work by a black composer played by a leading American orchestra) and heard thereafter in performances in Europe and South America. Unable to make a living from his concert compositions, however, Still worked as an arranger and orchestrator of music for radio, for Broadway shows, and for Paul Whiteman, Artie Shaw and other popular bandleaders. A 1934 Guggenheim Fellowship allowed him to cut back on his commercial activities and write his first opera, Blue Steel, which incorporated jazz and spirituals. He continued to compose large-scale orchestral, instrumental and vocal works in his distinctive idiom during the following years, and after moving to Los Angeles in 1934, he supplemented that activity by arranging music for films (including Frank Capra’s 1937 Lost Horizon) and later for television (Perry Mason, Gunsmoke). Still continued to hold an important place in American music until his death in Los Angeles in 1978.

Still received many awards for his work: seven honorary degrees; commissions from CBS, New York World’s Fair, League of Composers, Cleveland Orchestra and other important cultural organizations; the Phi Beta Sigma Award; a citation from ASCAP noting his “extraordinary contributions” to music and his “greatness, both as an artist and as a human being”; and the Freedom Foundation Award. Not only was his music performed by most of the major American orchestras, but he was also the first Black musician to conduct one of those ensembles (Los Angeles Philharmonic, at Hollywood Bowl in 1936) and a major symphony in a southern state (New Orleans Philharmonic in 1955). In 1945, Leopold Stokowski called William Grant Still “one of our great American composers. He has made a real contribution to music.”

Still’s “Sunday Symphony,” composed in 1958 as the last of his five works in the form, was numbered No. 3 to replace his original Third Symphony of 1945, which was discarded and later revised as the Symphony No. 5. The work was not performed until 1984, six years after the composer’s death, when the North Arkansas Symphony Orchestra, conducted by Carlton R. Woods, gave its premiere. Still’s use of programmatic titles for the movements of his “Sunday Symphony” evokes the worship activities of a typical Sabbath — The Awakening; Prayer; Relaxation; and Day’s End and a New Beginning. The composer’s daughter, Judith Still Headlee, observed that because her father believed the communicative power of music to be a gift from God, this Symphony represents “not just one day, but a lifelong way of thinking. Every day in his career was one of prayer and self-improvement, and, for him, every day and every piece of music constituted a new beginning and a fuller opportunity to serve the creator.”

The Awakening begins with a stern unison proclamation which is followed by a playful main theme, given in bright orchestral sonorities with much dialogue between strings and winds. A contrasting folk-like melody, built from a gapped scale, occupies the center section. The main theme returns to round out the movement’s form. Prayer is based on a haunting lament for the English horn. A broad, hymnal theme is introduced by the strings and becomes more agitated as the music unfolds. An altered recapitulation of the lament theme, led by English horn doubled by piccolo, closes the movement. Relaxation is a lighthearted dance featuring the high piping woodwinds. The finale, Day’s End and a New Beginning, is more ominous and heavy in character than its title might imply. The main part of the movement is based on a spiritual-inspired string theme, and grows with a steady tread to a full but foreboding ending.

The Grant Park Music Festival gratefully acknowledges the generous support from its 2015 sponsors: BMO Harris Bank, Season Sponsor; Fairmont Chicago Millennium Park, Official Hotel; Macy’s, Official Picnic Sponsor; and ComEd, Concert Sponsor. The Grant Park Music Festival is supported in part by an award from the National Endowment for the Arts, and partially supported by a grant from the Illinois Arts Council Agency.