On Posted on May 26, 2015 by Elizabeth Neukirch to Latest News, News 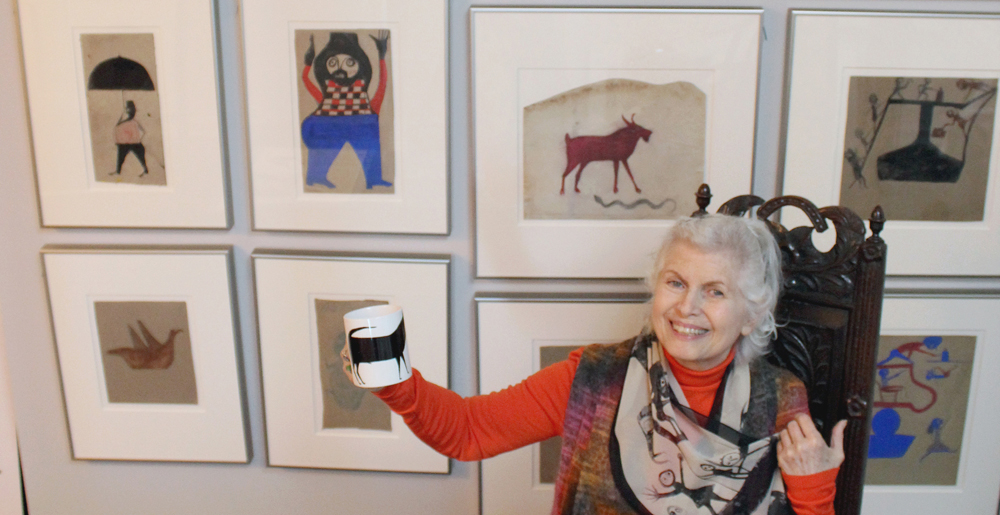 (CHICAGO, IL) May 25, 2015 — It was announced today that veteran Chicago art authority Judy Saslow will retire and close her River North gallery by the end of August 2015. When the Judy A Saslow Gallery opened 20 years ago, the Gallery focused exclusively on art created by self-taught (‘outsider’) artists from Europe that were otherwise not represented in the River North district. Works by the American outsider artists followed, augmented later by contemporary art.

The retirement celebration will also include the Gallery’s final exhibition: artworks selected during a recent visit to Japan by Saslow and Gallery Director William Odom. To be shown are a selection of traditional Japanese landscape prints by well-known artist Hiroshige along with the work of contemporary Japanese artists Arata Nojima (copperplate prints) and Chiaki Shuji (watercolors and intaglio prints). The exhibition will continue through June 20.

Beginning Friday, June 26, an expansive collection of important pieces from the Gallery inventory will be available for sale in conjunction with the closing of the Gallery. The sale will continue through the summer until the doors are officially closed, no later than August 30. In addition to two-dimensional visual art, the Gallery has a stunning array of tribal, ethnographic artifacts and jewelry collected from all parts of the globe.

Citing some reasons for retirement, Saslow proclaimed, “I’m ready for another adventure! I’ve been a wife & mother, a teacher, a lawyer, and for the last 20 years, I feel fortunate to have used my original passion for collecting naïve and African art into running what I’d like to consider a successful gallery. But be assured, I’m not going anywhere! Just because I’m closing the gallery, I’m not leaving the art community. I hope this frees me up to spend more time with artists, students and their projects.”

Judy Saslow opened the Judy A Saslow Gallery in 1995, continuing a lifelong passion to surround herself with art, and ultimately becoming a recognizable, iconic figure in the Chicago art scene. As a child, attending classes at Chicago’s Art Institute, she would spend hours before and after class wandering through the galleries. Later, as an elementary school teacher and a mother of three, she was continually exposed to the delights of naïve, ‘natural,’ nonconforming art. Saslow, through her own collecting and the Gallery, focused on work created by self-taught American and European outsider artists. She is one of the

founders of the Chicago-based Intuit Center for Intuitive and Outsider Art, and remains on its board today. Her gallery was annually a “must-see” staple of art fairs in New York, Paris, and Chicago.

Personally, Saslow is a well-respected collector in the Chicago area, and one of the top collectors in the country of the works of self-taught Alabama artist Bill Traylor (1854-1949). Her undergraduate works in psychology and sociology, and her experiences as an attorney specializing in family law, came into sharp focus while visiting art therapy programs. She considers the art to be a powerful expression of artists’ inner visions, a window to the soul of the creator. With the creation of her gallery, Saslow put a new spin on the process of exhibiting art. Her intent for the gallery was to be unintimidating and homelike—a place where people could feel free to linger, to learn more about the art while envisioning how each piece might fit into their own personal collections.

About the Japanese exhibition

Judy A Saslow Gallery proudly presents rarely available works by traditional Japanese landscape print artist Hiroshige (1797-1858). Also exhibited will be works by two major contemporary artists from Kyoto, Japan: Arata Nojima (1982-) and Chiaki Shuji (1973-). Nojima will be represented by his series of six copper plate prints entitled, After the Beauty Asleep 1-6 (2014). Nojima attended the Royal College of Art in London and received his Masters in Fine Arts with a concentration in printmaking from Kyoto City University. He has been showing internationally since 2005 with solo shows in New York, Tokyo, Kyoto, Busan, and London. Eight of Chiaki Shuji’s water color drawings and intaglio prints from 2007-14 will be exhibited. Shuji received her graduate degree in printmaking from Kyoto’s Seika University Department of Fine Arts and completed post-graduate studies in printmaking at Kyoto City University. She has had solo exhibitions in Montana, USA; Kyoto, Japan; Tokyo, Japan; Osaka, Japan; and Seoul, Korea.