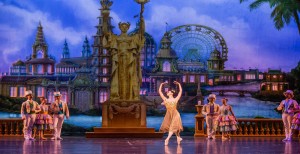 ‘ ‘Of the productions, the Chicago Tribune’s Chris Jones said, “You rarely think of “The Nutcracker” as a work of fragility, but that is what Wheeldon and his team somehow achieve here. It’s especially apparent with Jaiani, who touched me greatly this year and whose maternalistic kindness is as vulnerable as it is leadership any girl, any city, needs to thrive by knowing itself. But you see it throughout the company. And it’s an especially notable achievement given that setting this ballet at Chicago’s greatest moment of triumph could easily have come off as pandering or hubristic.

It does not. It comes off as an honest and deeply moving exploration of our collective hearts and a reminder not to forget the city’s kids, who will be best served by open-hearted access to all that makes Chicago itself.  ‘ ‘