On Posted on June 8, 2015 by Elizabeth Neukirch to Latest News, News 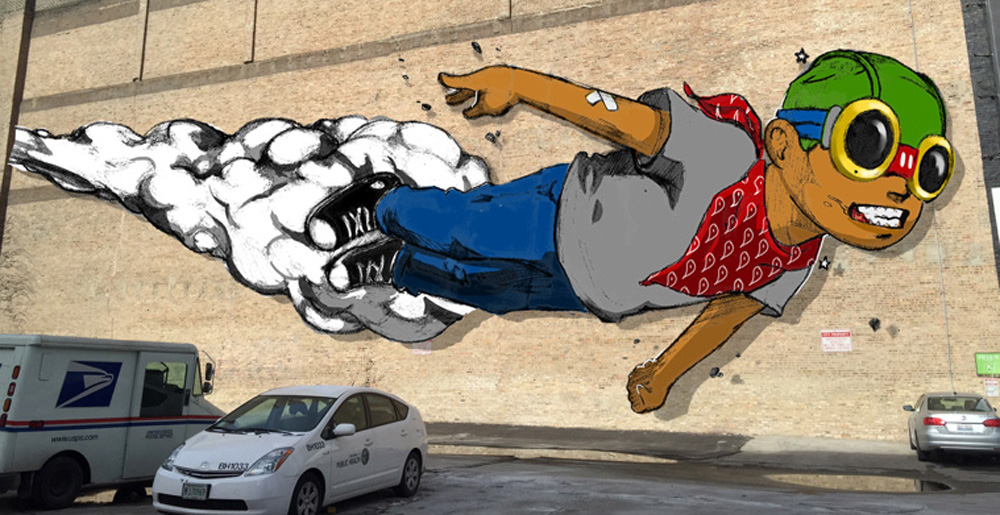 The Wabash Arts Corridor—a group of educational institutions, art galleries, performances spaces, hotels and restaurants in the district—was formed by Columbia College Chicago and has been repurposing building walls in the area for several years as vibrant street art canvases. The new murals are being created by artists affiliated with Vertical Gallery; all will have exhibitions or special pop-up appearances at the gallery in the coming year.

“We are so excited to welcome these internationally renowned artists and their work to the Wabash Arts Corridor,” says Mark Kelly, WAC chair and Columbia College Chicago vice president for student success. “Some ten new large-scale street murals will join the incredible works of Shepard Fairey, POSE, RETNA and Cleon Peterson, to truly bring to life our vision for the Corridor as a ‘living urban canvas.’”

The mural project also aligns with CLA’s Transforming Wabash initiative to revitalize Wabash Avenue from Congress Parkway to Wacker Drive and make the district more economically competitive—in this case strengthening and supporting the artistic, cultural and higher education institutions in the area.

“Enriching the pedestrian experience along Wabash Avenue is one of the most impactful and realistic improvements we can make to promote this district and drive economic development,” says CLA President and CEO Michael Edwards. “Our support of this mural project and the work of the Wabash Arts Corridor is a continuation of CLA’s commitment to create, manage and promote high-performing experiences in the Loop.”

Recognized internationally, Hebru Brantley has exhibited widely and has received commissions from important collectors for large scale works around the world. He has collaborated with Adidas, Nike, Redbull and Skyy Vodka, among others, and has a roster of clients including George Lucas, Jay-Z, LeBron James, Lupe Fiasco, Tyra Banks and Swizz Beats. His work has been featured in Ebony, Jet, New York Post, The Seattle Times, Chicago Tribune, Chicago Sun-Times and Chicago Reader. In 2013 he was chosen as “Breakout Artist” by New City and as a featured artist for Chicago Artist Month. Brantley earned a B.A. in Film from Clark Atlanta University, and has a background in design and media illustration.

About the Wabash Arts Corridor

The Wabash Arts Corridor (WAC) is Chicago’s “living urban canvas.” Founded in 2013, the WAC is one of the city’s major cultural assets comprised of eight educational institutions, 19 galleries, 14 performance spaces, five major hotels and more than 40 restaurants. Connecting local businesses and commerce with education, cultural programming and the visual, performing and media arts, the WAC is an urban lab for creative expression, innovation and excellence in the arts. For more information, please visit www.WabashArtsCorridor.org.

Vertical Gallery is committed to exhibiting and promoting urban, contemporary and street art. Established in 2013 in Chicago’s Ukrainian Village neighborhood, the gallery focuses on work influenced by urban environments, street art, pop culture, graphic design and illustration. It is working to bring this art form to a broader audience and eliminate the barriers that exist between traditional institutions, contemporary galleries, art collectors and casual viewers. The gallery welcomes open exploration and discussion of urban-contemporary art. New monthly exhibits highlight local, national and international artists. For more information or to view and purchase past and current artwork, please visit www.verticalgallery.com.

About the Chicago Loop Alliance Foundation

Columbia College Chicago is an urban institution that offers innovative degree programs in the visual, performing, media and communication arts for nearly 10,000 students in more than 100 undergraduate and graduate programs. An arts and media college committed to a rigorous liberal arts curriculum, Columbia is dedicated to opportunity and excellence in higher education. For further information, visit www.colum.edu.