On Posted on January 8, 2016 by Elizabeth Neukirch to Latest News, News 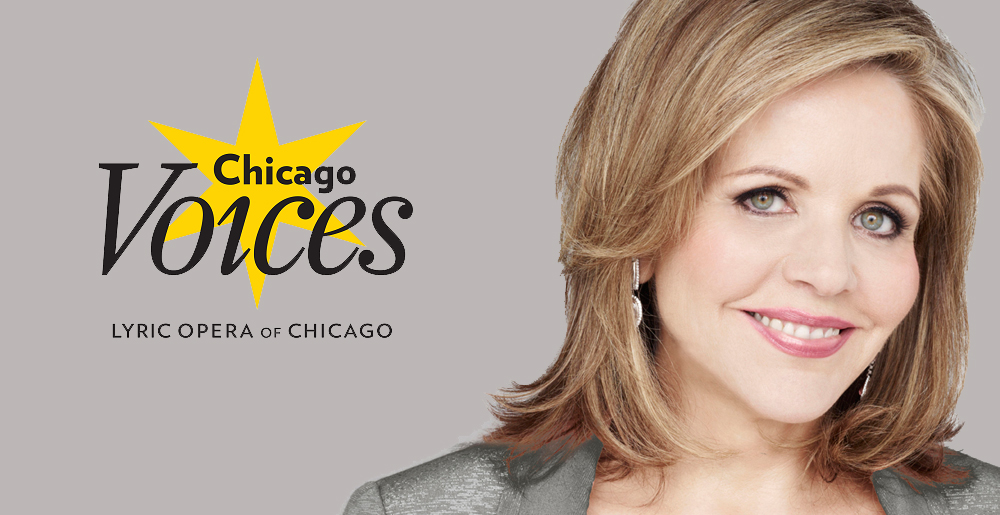 Chicago – Lyric Opera and its Creative Consultant Renee Fleming are excited to announce Chicago Voices, a groundbreaking, multi-year initiative celebrating Chicago’s vibrant, diverse vocal music culture. Chicago’s musical heritage is one of the city’s greatest gifts to the world. Chicago Voices is sparked by the idea that there has never been a more crucial time to invite the whole city to find common ground in our musical riches, to honor the great voices of our past, and to nurture the evolving musical life of the city today. Partnering with Chicago Public Library, Chicago History Museum and Columbia College Chicago, Chicago Voices will engage and interact with the entire Chicago community in innovative, resounding ways.

Inspired in part by Renee Fleming’s artistic leadership of American Voices at the Kennedy Center in 2013, Chicago Voices is a joint project with Lyric Unlimited, Lyric’s department devoted to education, community engagement and new artistic initiatives. Plans for Chicago Voices were announced by Ms. Fleming and Lyric’s general director Anthony Freud on January 7 at The Hideout, an iconic Northside music spot known as “Chicago’s most loved small venue.”

Chicago Voices is made possible by major support from The Andrew W. Mellon Foundation and the Ford Foundation. This project is partially supported by The Chicago Community Trust and an IncentOvate Grant from the City of Chicago Department of Cultural Affairs & Special Events.

“We are deeply grateful to The Andrew W. Mellon Foundation’s leadership support of this new initiative,” said Lyric’s general director Anthony Freud. “The Mellon Foundation has been instrumental in fostering and endorsing Lyric’s plan to serve a wider public.

“We are thrilled to be embarking on Chicago Voices, a unique, groundbreaking multi-year project encompassing a wide variety of activities and genres,” said Freud. “It includes Community Created Performances for which we are putting creative control into the hands of communities to tell their stories using the building blocks of opera: storytelling through song. It’s a tremendously exciting idea that I hope will cast a spotlight on the untold stories of Chicagoans and the tremendous creativity that exists in our city.”

Cayenne Harris, director of Lyric Unlimited, said, “Since Lyric Unlimited was established in 2012, we’ve been successful in presenting opera in fresh, unexpected ways in neighborhoods throughout the city. Chicago Voices takes our goal of being an incubator for community involvement to the next step.”

Community Created Performances: Beginning January 7, Lyric invites groups of Chicago residents to share and submit stories from their communities. Applications and instructions can be found at chicagovoices.org. From the initial pool of applicants, semifinalists will be chosen. Their stories will be profiled in videos on the Chicago Voices website, where the public will be able to vote for the stories they find most compelling. The top three vote-getters will receive professional artistic and technical support to develop their stories into original music theater works, culminating in a fully-realized public performance in fall 2016. The deadline for the first round of applications is March 1, 2016.

Citywide Celebration: Throughout the two years of the initiative, there will be a variety of ways for all Chicago residents to take part. Current plans include an invitation for Chicagoans to record themselves singing and share their performances on the Chicago Voices website; an exhibition by leading photographers featuring images of iconic Chicago singers both historic and contemporary;  a series of talks at the Chicago History Museum focusing on pre-eminent Chicago vocalists past and present; and a collaboration with clubs and music venues throughout the city to present and highlight outstanding local singers in a variety of genres. Lyric Unlimited is also developing a range of Chicago Voices educational resources for students.

Gala Concert: On Saturday, February 4, 2017, at the Civic Opera House, the Chicago Voices Gala Concert will showcase an array of vocal talent with deep ties to Chicago. Curated by Renée Fleming, the Gala Concert will include blues, jazz, soul, rock, folk, hip-hop, gospel, and classical music. The Gala Concert will also be shaped by an illustrious advisory group, including famed musician Herbie Hancock, jazz vocalist Kurt Elling and folk singer/songwriter John Prine. Fleming said, “The Chicago Voices Gala Concert will be an extraordinary evening of vocal artistry. The advisory group, comprised of top-flight musical artists across the full spectrum of performance styles, will make the Gala an unforgettable celebration of Chicago’s dazzling, diverse musical culture.”

Expert Panels & Master Classes: On the weekend of February 3-5, 2017, in conjunction with the Chicago Voices Gala Concert, a multi-day series of expert panels and master classes will be presented in partnership with Columbia College Chicago. Many of the vocalists featured in the Gala Concert will lead or participate in events aimed at beginning professional vocalists, music teachers, students, and music enthusiasts. Topics explored will include vocal health and medical advances, the radically changing recording and performance industries, marketing, promotion, social media, and career planning. A full lineup of participating artists, schedule and pricing info will be announced in fall 2016.

Lyric Unlimited was launched with major catalyst funding from The Andrew W. Mellon Foundation and receives major support from the Hurvis Family Foundation.

Lyric Unlimited is a long-term, evolving initiative that encompasses company activities that are not part of Lyric’s mainstage opera season. Its mission is to provide a relevant cultural service to communities throughout the Chicago area and to advance the development of opera by exploring how opera as an art form can resonate more powerfully with people of multiple backgrounds, ethnicities, and interests. It also leads the development of innovative partnerships with a wide range of cultural, community, and educational organizations to create a breadth of programming through which Chicagoans of all ages can connect with Lyric. In the 2014/15 season, more than 126,000 children, students, and adults participated in Lyric Unlimited activities. For more information about Lyric Unlimited program offerings, visit lyricopera.org/lyricunlimited.

About The Andrew W. Mellon Foundation