On Posted on January 11, 2016 by Elizabeth Neukirch to Latest News, News 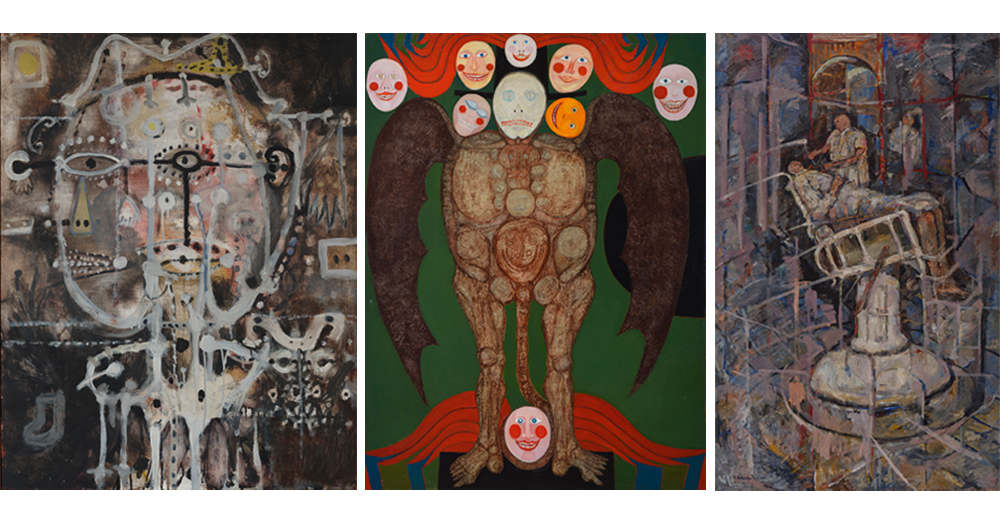 The Monster Roster was a fiercely independent group of mid-century artists, spearheaded by Leon Golub (1922–2004), which created deeply psychological works drawing on classical mythology, ancient art, and a shared persistence in depicting the figure during a period in which abstraction held sway in international art circles.

“The Monster Roster represents the first group of artists in Chicago to assert its own style and approach—one not derived from anywhwere else—and is one of the most important Midwestern contributions to the development of American art,” said co-curator John Corbett. “Their work was gnarly, nasty, and out of step with prevailing trends. Working at a remove from the country’s contemporary art discourse, they synthesized many disparate influences into a distinctive and powerful vision of humanity at mid-century.”

The exhibition examines not only the complex aesthetics and personal styles of Golub and his compatriots but also uncovers the Monster Roster’s relationships with preceding generations of Chicago artists and differences from the well-known Chicago Imagists who followed. Monster Roster brings together over 60 major paintings, sculpture, and works on paper from the Smart Museum and other major collections in order to provide the definitive account of the movement, from the formation of Exhibition Momentum in 1948 to the group’s dispersal in the mid-1960s.

Monster Roster will be accompanied by a comprehensive publication—the first of its kind—that includes an introductory essay by critic and collector Dennis Adrian; an overview of the Monster Roster by Corbett; a discussion of Monster Roster prints; a personal reflection from artist Arlene Shechet; an essay on Golub; and an introduction to the historical context surrounding the group’s emergence in the 1950s, and more. The publication will also contain full-color reproductions of all work on view in the exhibition, a detailed chronology, and extensive reproductions of ephemera and historical photographs. The book will be distributed by the University of Chicago Press.

Among related public programming highlights are A Night with Filmmaker Tom Palazzolo, a screening of works by this documentarian who honed his experimental skills studying and working with artists of the Monster Roster (March 11); monthly Family Day activities offering hands-on craft activities inspired by the work of Monster Roster artists (the first Saturday in March-June); and Monster Mash Up, an expert panel discussion on the context of postwar Chicago with author Thomas Dyja, plus Lynne Warren and Mark Pascale, curators at the MCA and Art Institute of Chicago, respectively, and Monster Roster co-Curator John Corbett (March 22), and a tour led by curators Corbett, Dempsey, and Moss (June 5).

More information on Monster Roster: Existentialist Art in Postwar Chicago and related programming can be found at http://smartmuseum.uchicago.edu/exhibitions/monster-roster-existentialist-art-in-postwar-chicago/

About the Smart Museum of Art
The Smart Museum of Art offers an intimate environment for bold encounters with art. Both fueling and expressing the creative energy of the University of Chicago, the Smart opens the world to boundary-breaking art and ideas through innovative special exhibitions, ever-changing programs, and distinctive collections.

Ted Halkin, Angel, 1953, Oil over gouache on board. Collection of the Illinois State Museum.

Seymour Rosofsky, Patient in Dentist’s Chair, 1961, Oil on canvas. Smart Museum of Art, The University of Chicago, Gift of the Rosofsky Estate, 2014.16.