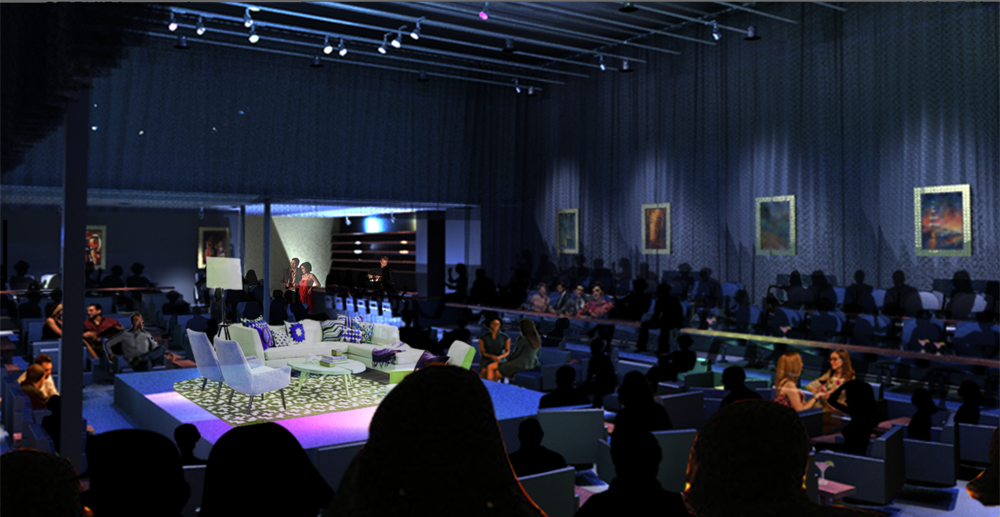 “We envision Windy City Playhouse to be a new kind of theater; a space for friends to gather, colleagues to engage and strangers to meet, all in the name of art. Our primary creative endeavor is, of course, live theater, but other contributing art forms will play a part. With the addition of visual art, auditory art and the art of mixology, we aim to entertain and engage audiences in a new and holistic way,” said Windy City Playhouse Co-Founder and Artistic Director Amy Rubenstein. “I’m pleased to say that our vision for a contemporary theater showcasing relevant, accessible works has been greeted with excitement and open arms from a supportive community. Under the guidance of our esteemed, award winning directors – and equally accomplished designers – along with community leaders, we are proud to introduce a new venue to Chicago’s acclaimed theater roster.”

A 2008 finalist for The Harold and Mimi Steinberg/ATCA New Play Award, End Days is the story of the Steins – a typical American family working their way through tragedy, each in his or her own way. In the aftermath of 9/11, it’s no wonder that Sylvia Stein (Gluschenko) thinks the end of the world is coming. It’s also no wonder that teenaged Rachel (Sari Sanchez) thinks her newly Evangelical mother is a fool, and looks to physicist Stephen Hawking (Strafford) for solace. Father and husband Arthur (Kupferer) has taken an entirely different approach: never changing out of his pajamas. But, an Elvis-impersonating next-door neighbor (Cefalu, Jr.) may just be able to bring the Steins – and their disparate views on the world – together.

Stephen Cefalu, Jr. (Nelson) Most recent credits include the World Premiere of Pins and Withers (Red Orchid); Letters Home and Frindle (Griffin Theatre); the World Premiere of Reality Check (MPAACT); and the reading of Boy Small (Chicago Dramatists). Cefalu, Jr. is an associate artist with Fine Print Theatre, where he has appeared in Christmas in Chicago, the Xylophone Test, and Last One Standing, among others. Film/TV credits include: Shameless and director Stephen Cone’s This Afternoon and Support. This fall, he begins training to join the ensemble of Blue Man Group.

Tina Gluschenko (Sylvia) Most recent credits include Rapture, Blister, Burn (u/s, Goodman Theatre), A Christmas Carol (Drury Lane Oakbrook), and the world premiere of The Beverly Hillbillies, The Musical (Theatre at the Centre). Other Chicago credits include The House of Martin Guerre and Randy Newman’s Faust (Goodman), My Thing of Love, and Ghost in the Machine (u/s, Steppenwolf), Away! (Northlight Theatre), Hamlet! The Musical (Chicago Shakespeare with Second City Theatricals), Sex and the Second City and Songs of The Second City (Second City Theatricals), and A Class Act (Porchlight Music Theatre). National credits include Melancholy Baby (Ars Nova, NY) and National Tours of Into The Woods and The Secret Garden.

Keith Kupferer (Arthur) is currently starring in American Theater Company’s The Humans. Other Chicago credits include The Qualms, Good People, Middletown, South of Settling, Of Mice & Men, Carter’s Way, Men of Tortuga; Things Being What They Are; Jesus Hopped The A Train and Tavern Story (Steppenwolf Theatre); God of Carnage, High Holidays, Sarah Ruhl’s Passion Play and The Old Neighborhood (Goodman Theatre); Appropriate (Victory Gardens Theatre); Gypsy (Chicago Shakespeare Theater); Execution of Justice (About Face Theatre); Cat Feet and The Old Neighborhood (Northlight Theatre); Desire Under The Elms, a co-production between Philadelphia’s Freedom Theatre and Chicago’s Court Theatre; and the long running hit, Shear Madness.  Kupferer is a founding member of Rivendell Theatre Ensemble where he has performed in nine productions since 1996. Additional Chicago credits include The Unseen, The Meek, Canus Lunis Balloonis (for which he was nominated for a 1998 Joseph Jefferson award for Best Ensemble), and The Physicists (A Red Orchid); and Big Lake, Big City, Trust and Hillbilly Antigone (Lookingglass Theatre).  Film credits include the latest Ron Howard project, The Dilemma; Dark Knight; Public Enemies; The Express; Stranger Than Fiction; Road to Perdition directed by Sam Mendes; Fred Klaus; The Last Rights of Joe May ; The Merry Gentleman directed by Michael Keaton and the soon-to-be-released films Finding Santa; Resurrecting McGinn; Open Tables. TV credits include ABC’s Betrayal; NBC’s Crisis and Chicago Fire; ABC’s Detroit 187; A&E’s The Beast, the Fox series Prison Break; The Jamie Kennedy Experiment on WB and the CBS series Early Edition.

Sari Sanchez (Rachel) has recently returned to her hometown after working on the production side of the film and television industry in Los Angeles.  Theater credits include Tamer of Horses (Teatro Vista), Luna Gale (u/s Goodman Theatre) and Dark at the Top of The Stairs (American Theater Company), in addition to Friends Like These (Theatre Unleashed/North Hollywood).   She also works with Erasing The Distance.  Television credits include Fox’s Empire, USA Network’s Sirens, and NBC’s Chicago Fire.  Sanchez stars in the soon-to-be-released feature film, Kill Game, from Full Throttle Pictures.

Steven Strafford (Jesus/Steven Hawking) In addition to penning and starring in a national run of Methtacular!, other national theater credits include Spamalot (Original Las Vegas cast, Sacramento Music Circus), and tours of Grease, Cinderella (w/ Lea Salonga), and Peter Pan (w/ Cathy Rigby). Regional credits include the World Premiere of Sense and Sensibility (Denver Center) and in As Bees in Honey Drown (Cape Playhouse). In NYC, he was seen in The York Theatre’s The Mad Show. In the New York Musical Theatre Festival, he was in To Paint the Earth, and played multiple roles (including Jesus) in Songs for a More Funnier World. Most recently, he has appeared at Portland Stage Company’s A Christmas Carol as Bob Cratchit, having performed there before in both The Snow Queen and The Mystery of IRMA VEP.

Deborah Zoe Laufer (Playwright) Laufer’s plays have been produced at Steppenwolf Theatre, Cleveland Playhouse, Geva Theatre Center, Cincinnati Playhouse in the Park, Actor’s Theatre of Louisville, Portland Stage, and eighty other theaters around the country, in Germany, Russia and Canada. End Days was awarded The ATCA Steinberg citation and appeared at Ensemble Studio Theatre through an Alfred P. Sloan Foundation Grant. Informed Consent, which was a Sloan commission will be produced in 2015 by Primary Stages and EST at the Duke Theatre in NYC. Other plays include Leveling Up, Sirens, Out of Sterno, The Last Schwartz, Meta, The Three Sisters of Weehawken, Fortune, The Gulf of Westchester, Miniatures, and Random Acts. Laufer is a recipient of the Helen Merrill Playwriting Award and the Lilly Award and grants and commissions from The Edgerton Foundation, the NEA and NNPN. Her plays have been developed at PlayPenn, The Eugene O’Neill NPC, Williamstown Theatre Festival, Ojai, The Missoula Colony, The Cherry Lane Alternative, The Dramatists Guild, New Georges, The Lark, Asolo Rep. and the Baltic Playwrights Conference. She is a graduate of The Juilliard School and a member of the BMI Lehman Engel Musical Theatre Workshop and The Dramatists Guild.

Henry Godinez (Director) Born in Havana, Cuba, Godinez is known for fostering diverse voices within the Chicago theatre community. He actively pursues this work as Goodman Theatre’s Artistic Associate and Curator of the Latino Theatre Festival. He has directed productions at Goodman, Chicago Children’s Theatre, Victory Gardens, Teatro Visto (of which he is a Co-Founder and former Artistic Director), Signature Theatre Company in New York City, Kansas City Repertory, Oak Park Festival Theatre, and Teatro Buendía. TV credits include The Beast, The Chicago Code, Boss, and Chicago Fire. Godinez currently serves as an Associate Professor at Northwestern University and has taught previously at The Theatre School at DePaul University and Columbia College Chicago. He serves on the Board of Directors of the Illinois Arts Council and the Albany Park Theater Project and on the editorial board of Northwestern University Press. He was named the 2008 Latino Professional of the Year by the Chicago Latino Network and is the recipient of the 1999 Theatre Communications Group Alan Schneider Director Award and the Distinguished Service Award from the Lawyers for the Creative Arts.

The performance schedule is: Wednesdays and Thursdays at 7:30pm; Fridays and Saturdays at 8pm; and Sundays – alternating at 3 and 5pm (consult website for most current schedule).

Single tickets for End Days range from $25-$45 and are available by calling 312-374-3196 or visiting windycityplayhouse.com/end-days/. Discount tickets are available for preview performances, in addition to student & senior ticket pricing for all performances.

The Windy City Playhouse Season – 2015 and beyond