On Posted on February 18, 2015 by Elizabeth Neukirch to Latest News, News 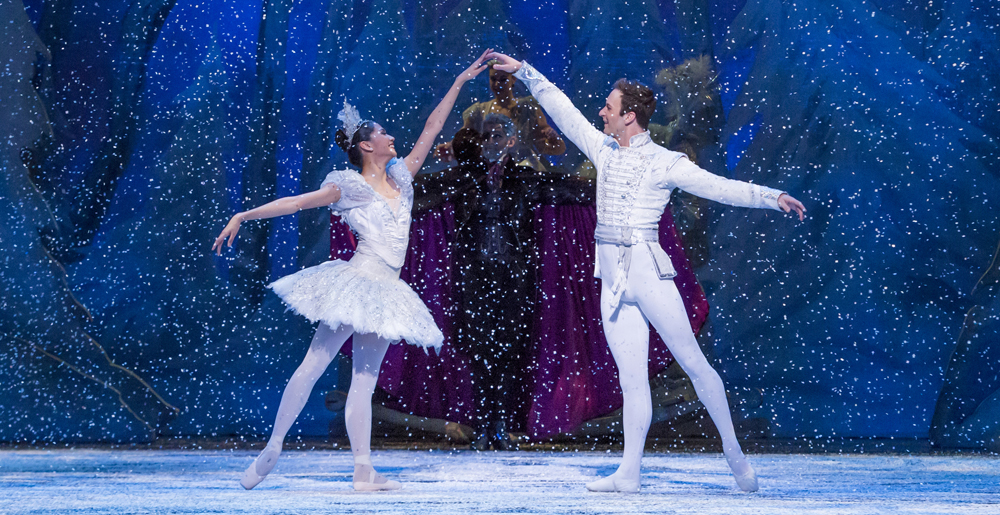 and Return of Frederick Ashton’s Cinderella

February 17, 2015 (Chicago)– Ashley Wheater, Artistic Director of The Joffrey Ballet, proudly announces an epic 60th Anniversary Season of Celebration in 2015-16 including three World Premieres, the North American Premiere of Sylvia by John Neumeier, the Joffrey Premiere of Christopher Wheeldon’s Fool’s Paradise, and the return of Frederick Ashton’s lavish Cinderella. Notably, 2015 will mark the farewell season of Robert Joffrey’s The Nutcracker. The Joffrey has commissioned Christopher Wheeldon, whose An American in Paris is Broadway-bound this spring, to re-envision a major new Nutcracker to receive its World Premiere here in December 2016.

For the third year, an additional season program will be presented in September, a one-weekend-only program entitled “Millennials” that showcases new works by this country’s most promising next generation choreographic talents, including: World Premieres by Annabelle Lopez Ochoa and Myles Thatcher (titles TBA) and the Joffrey Premiere of Christopher Wheeldon’s Fool’s Paradise, September 16-20, 2015. The Joffrey’s annual fall engagement proudly presents the North American Premiere of the female-powered, full-length story ballet Sylvia by internationally-celebrated choreographer and Midwest native son John Neumeier, October 14-25, 2015, followed by the farewell engagement of Robert Joffrey’s The Nutcracker, December 4-27, 2015. The Joffrey presents “Bold Moves,” a mixed repertory program featuring a World Premiere by British choreographer Ashley Page, along with a repeat performance of Yuri Possokhov’s popular RAkU and the Jir˘í Kylián classic Forgotten Land, February 10-21, 2016. Rounding out the season is the return of the family favorite, Cinderella, April 20–May 1, 2016.

All performances take place in the Joffrey’s home venue, the historic Auditorium Theatre of Roosevelt University, in downtown Chicago at 50 East Congress Parkway. All programs throughout the season feature live music performed by the Chicago Philharmonic conducted by Scott Speck, Music Director of The Joffrey Ballet.

2015-16 marks the 60th Anniversary season of The Joffrey Ballet. Classically trained to the highest standards, The Joffrey Ballet expresses a unique, inclusive perspective on dance, proudly reflecting the diversity of America with its company, audiences, and repertoire which includes major story ballets, reconstructions of masterpieces and contemporary works.  Founded by visionary teacher Robert Joffrey in 1956, guided by celebrated choreographer Gerald Arpino from 1988 until 2007, The Joffrey Ballet continues to thrive under Artistic Director Ashley Wheater and Executive Director Greg Cameron.

Said Wheater: “During the season we will celebrate the evolution of the company and its many landmarks. We bring John Neumeier’s Sylvia to the American audience for the first time. We introduce three world premiere works by some of today’s most exciting choreographers. After twenty nine memorable years, we will retire Robert Joffrey’s The Nutcracker. We celebrate its enduring legacy with one final series of performances in 2015, and look ahead to the 2016 premiere of Chris Wheeldon’s magical new Nutcracker. In the spring, we revive Frederick Ashton’s Cinderella, one of Robert Joffrey’s favorite ballets, and a favorite of families around the world.”

About the 2015-16 60th Anniversary Season of Celebration

The Joffrey launches its 2015-16 season with a mixed repertory program entitled “Millennials,” showcasing new works by this country’s next generation of choreographic talents, including: World Premieres by Annabelle Lopez Ochoa and Myles Thatcher (titles TBA) and the Joffrey Premiere of Christopher Wheeldon’s Fool’s Paradise.

Fool’s Paradise is set to music by Joby Talbot. Golden lighting captures falling shimmering petals as the dancers’ bodies form a series of living sculptures. This display of beauty and strength follows closely to the score’s mysterious turns. Wheeldon’s Swan Lake recently broke Joffrey box office records in its Chicago Premiere, while An American in Paris, directed and choreographed by Wheeldon, has its Broadway Premiere this spring.

Dancer-turned-choreographer Lopez Ochoa, known for her close collaborations with dancers and a fierce improvisational talent, creates for the Joffrey a 22-minute piece (untitled) featuring 20 dancers in a series of ensembles set to “Weather One” by Michael Gordon. A tree of LED lights figures prominently in the design.

Thatcher, a current dancer with the San Francisco Ballet, for whom he’s also created new works, will premiere a piece (untitled) set to music by Steve Reich. Audiences can expect a high energy, contemporary work based on the classical vocabulary.

The Millennials program will be presented in 5 performances only, September 16-20, 2015.

For its fall production, The Joffrey proudly presents the North American Premiere of Sylvia, a brilliant full length story ballet by internationally-acclaimed, Milwaukee-born choreographer John Neumeier. Set to music by Léo Delibes, among its themes are deception, unrequited love and obsession. Sylvia’s coming-of-age vulnerability clashes with her youthful exuberance. True love will balance these opposing forces but loss of that love will test her newfound purpose in this magnificent female-powered ballet. Neumeier returns to the U.S. for this homecoming, having honed his vision to international acclaim in Europe, leading the Hamburg Ballet as director and chief choreographer since 1973. Sylvia is presented in 10 performances only, October 14-25, 2015.

Robert Joffrey’s The Nutcracker returns for its final season at the Auditorium Theatre. Conceived and directed in 1987 by company founder Robert Joffrey, The Nutcracker brings Tchaikovsky’s classic score to life with battling toys, raucous rodents, swirling snowflakes, waltzing flowers and the splendor of the full Joffrey company on stage with over 100 young dancers from the Chicagoland area. Robert Joffrey’s The Nutcracker is presented in 24 performances, December 4-27, 2015. The Joffrey has commissioned Christopher Wheeldon to a re-envision a major new Nutcracker to receive its World Premiere here in December 2016.

A winner of many prestigious dance awards, Page is known for his daring collaborations with visual artists and contemporary composers. Though drawn from the discipline of ballet, his bold choreography explores new avenues for dance. Following 27 years dancing and choreographing for London’s Royal Ballet, and then a decade as the director of the Scottish Ballet, Page is currently working on numerous commissions from ballet and contemporary dance companies around the world, including the Joffrey. For this program, Page is creating a work (untitled) set to the violin concerto, Concentric Paths by much-in-demand composer, Thomas Ades.

RAkU, which mesmerized Joffrey Ballet audiences at the Chicago Premiere in September 2014, returns by popular demand. Set to music by Shinji Eshima, this contemporary ballet by San Francisco Ballet Resident Choreographer Possokhov, tells the tale of a Japanese emperor, his wife and a jealous monk driven mad by obsessive love. With a modernist, sepia-toned costume and set design with projections and moving screens, it is a stylized interpretation of the burning of the Kyoto Temple of the Golden Pavilion, brimming with lush lyricism and dark drama.

Forgotten Land, last performed by the Joffrey in 2012 was created for the Stuttgart Ballet in 1981 by the ground- breaking Czech choreographer Jir˘í Kylián. Set to the music of English composer Benjamin Britten (Sinfonia da Requiem), with its images of the sea engulfing the land, this ballet is also inspired by a painting by the Norwegian expressionist Edvard Munch, of women on a beach staring at the sea. Forgotten Land explores memories, events, and people that over time are lost or forgotten and how people sometimes vainly try to recover them, or a sense of them, in order to regain their former power and value.

The classic fairy tale Cinderella comes to life in this dazzling ballet by Frederick Ashton and scored by Sergei Prokofiev. Cinderella’s Fairy Godmother and the Fairies of the Four Seasons help her overcome her mean-spirited step sisters and find her Prince. Grand sets and costumes add beauty to this family favorite production, featuring the full company portraying a wealth of 39 beautifully-drawn characters. Last performed by The Joffrey Ballet in 2010, Cinderella joyously returns for 10 performances, April 20–May 1, 2016.

In celebration of the Company’s 60th Anniversary, performance-only tickets will be available for the first time for the Joffrey Gala Performance at the Auditorium Theatre. The special hour-long performance will be dedicated to Joffrey founders Robert Joffrey and Gerald Arpino and feature Arpino’s haunting Round of Angels with music by Gustav Mahler, as well his groundbreaking ballet-with-a-rock-band Trinity.

Three-program subscriptions, which do not include the September engagement or The Nutcracker, start at $84. Subscriptions will be available for purchase as of February 18, 2015, online at joffrey.org, by mail (Joffrey Ballet Subscriptions, The Joffrey Ballet, Joffrey Tower, 10 East Randolph Street, Chicago, IL 60601), by telephone at 312-386-8905, by fax at 312-739-0119, or by email at subscriptions@joffrey.org. Subscribers have the option to add on the September engagement at 50% off the single ticket price.

For more information on The Joffrey Ballet and its programs please visit joffrey.org.