On Posted on September 9, 2015 by Elizabeth Neukirch to Latest News, News 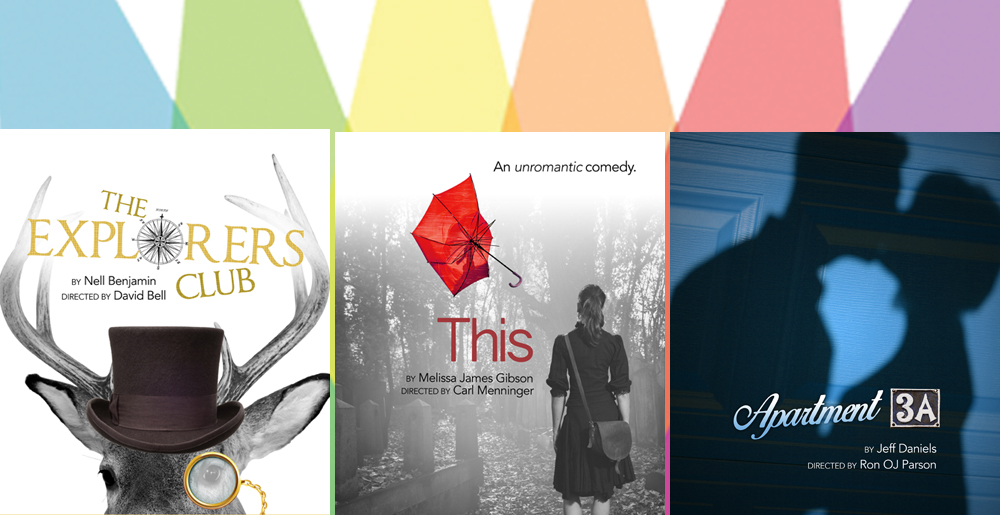 “Following the buzz of our 2015 premiere, the Playhouse has selected a sizzling second season – three more plays that all reflect a unique interpretation of ‘theater as entertainment,’” said artistic director Amy Rubenstein. “From period farce, to unromantic comedy, and closing with an enchanting new classic, the Playhouse promises another year of highly entertaining, high-quality art.”

The antics of The Explorers Club, set in a Victorian-era scientific gentleman’s club, are propelled by a woman who believes the blue-skinned aboriginal she’s liberated from his native tribe and brought to London will be her ticket to becoming the club’s first female member. Nell Benjamin, Tony Award™-nominated co-composer and lyricist of Broadway’s Legally Blonde, penned this madcap physical comedy, animated by lightning-quick dialogue, daredevil stunts, precision acrobatics and onstage snakes and guinea pigs. The prolific David H. Bell, currently developing the English-language version of La Révolution Française in Chicago, directs.

In June, Windy City Playhouse artistic associate Carl Menninger returns home from Washington, D.C. to direct the Chicago premiere of the off-Broadway hit This. This tart “melanchomedy” centers on four educated, artistically inclined thirtysomething New Yorkers whose longtime friendship is tested by an act of infidelity in a piercing, beautifully crafted new play for lovers of language, written by playwright Melissa James Gibson. Gibson’s 2002 Obie award-winning play [sic] was developed by Steppenwolf Theatre as part of its New Plays Lab in 1997 and produced at Chicago’s Roadworks Theatre in 2000.

The 2016 season closes in October with actor-musician-playwright Jeff Daniels’ soul-lifting comedy Apartment 3A, directed by Chicago favorite Ron OJ Parson. After catching her boyfriend in an acrobatic act of infidelity, spirited young idealist Annie Wilson has a televised melt-down at the local PBS station and moves into a shabby apartment, which may turn out to be the most magical move she’s ever made. Apartment 3Apremiered regionally at Daniels’ Purple Rose Theatre Company, in Chelsea, Michigan.

The Explorer’s Club has enough to deal with. One member has lost nearly all his guinea pigs, another can’t seem to locate the East Pole, the bartender is missing and, on top of all that, a woman wants to join. Before the British Empire crumbles under the weight, these good old boys must grapple with the approach of modernity, save the world from an international war and, for God’s sake, find a new bartender — but not until after brandy and cigars.

On the cusp of leaving their thirties and entering full-on middle age, Jane and her old college pals could use some laughs. Through conversations that bring warm moments and reminiscences, secrets creep in, too. In between camaraderie and support comes adultery, and mashed up against friendship comes betrayal. Jane must come to terms with friends she thought she knew and the woman she thought she was in order to become whole again.

It might be the nicest apartment in the building, but it can’t possibly be enough to make up for the day that Annie has had. A nasty breakup, an on-air meltdown and a fledgling romance have left her faithless and heartbroken. So when a simple visit from an enigmatic new neighbor starts to change things for the better, Annie has to ask: is it fate, luck, or… divine intervention?

The Windy City Playhouse performance schedule is: Wednesdays and Thursdays at 7:30pm; Fridays and Saturdays at 8pm; and Sundays (consult website for Sunday times).

Single tickets range from $35-$55 and will be available by calling 773-891-8985 or visiting windycityplayhouse.com.  Flexible subscription packages are available for the 2016 season.

Windy City Playhouse is a new theater at 3014 West Irving Park Road. Opened in March 2015, the Playhouse is a professional theater meant to entertain through exceptional contemporary, relevant and approachable art. Combining relatable material with high quality artistry, Windy City Playhouse seeks to create work accessible by audiences of all kinds. With a full service bar and light snacks, the Playhouse is not a traditional theater, rather a fun, relaxing and entertaining environment. With amenities such as swivel club chair seating, the Playhouse is designed as a space for audiences to linger before and after the performance—a place to decompress with art.