On Posted on July 9, 2015 by Elizabeth Neukirch to Latest News, News 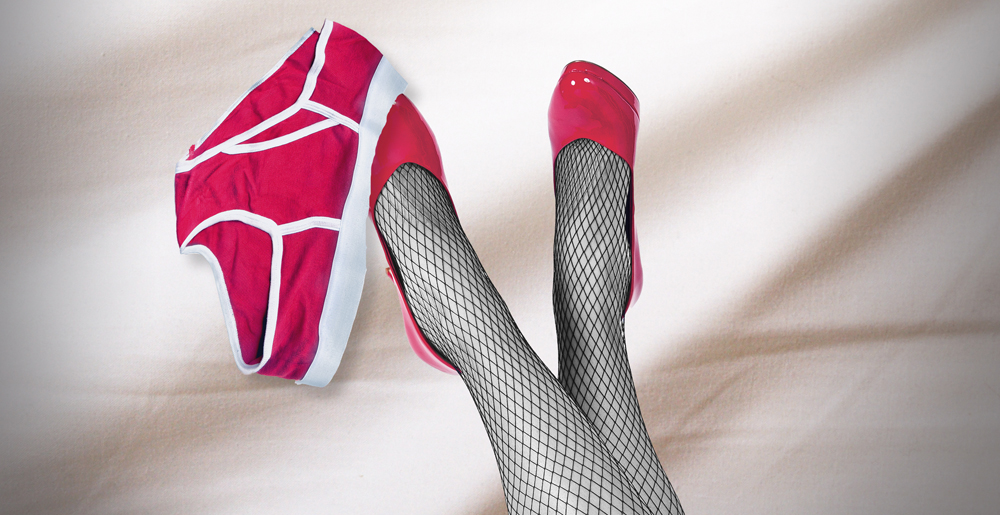 It’s three a.m. in New York City. Grad student Ben (Peter Meadows) and girlfriend Nancy (Emily Tate) are having passionate, unbridled sofabed sex until Nancy’s bizarre dirty talk leads to a mood-killing argument. Nancy leaves the apartment to seek council from her best friend Grace (Patrese McClain) who’s having a hard time seducing her rough-hewn new boyfriend Gene (Shane Kenyon). They call Grace’s therapist Mark (Chris Sheard) – who has company of his own (Robert Spencer) – in order to get his perspective. In a Love Actually meets La Ronde series of revelations and connections – romantic and otherwise – Things You Shouldn’t Say Past Midnight delves into the truths that sex really exposes.

“In Windy City Playhouse’s premiere season, our directors were given the freedom to interpret this idea – theater as entertainment – and what that meant to each of them. For director William Brown, it meant something fun, sexy, extremely physical and wildly comedic. Though different in tone from each of the first two shows, this is another exciting play for our audiences, and after the drama that was Stick Fly, we’re looking forward to sharing something much more lighthearted,” said Windy City Playhouse Artistic Director Amy Rubenstein.

Emily Tate (Nancy) most recently appeared in Step Up Productions’ Chicago premiere of DEAD ACCOUNTS. Other Chicago credits include: THE LANGUAGE ARCHIVE (Piven Theatre Workshop); BEDROOM FARCE (Eclipse); OPUS (Redtwist, Jeff nominated for Best Ensemble and Best Production); SENSE AND SENSIBILITY (Northlight Theatre) and LES LIAISONS DANGEREUSES (Remy Bumppo). She has appeared regionally at the Utah Shakespeare Festival, Milwaukee Repertory Theater, and was a member of the 2006-2007 Actors Theatre of Louisville Acting Apprentice Company, where she appeared in several productions throughout the season, including THE OPEN ROAD ANTHOLOGY, a Humana Festival world premiere. She is a proud native of Louisville, Kentucky and graduated from Centre College with a BA in Dramatic Arts and Psychology.

Peter Meadows (Ben) is an LA-based TV comedy writer and actor. This production of THINGS… marks his return to the theater after a “short” 15-year hiatus. In that time, he’s written for TV comedians (Joel McHale, Rob Riggle, Kristen Bell, Key & Peele), some surprisingly funny athletes and musicians (Blake Griffin, Drake, Shaquille O’Neal) and some less-than-hilarious politicians (Barack Obama, Mitt Romney). But Peter still considers the theater (and Chicago) his first home. He received a BFA in Drama from NYU’s Tisch School of the Arts, studied with the Royal Academy of Dramatic Arts in London, The Upright Citizens Brigade Theatre and The Groundlings.

Chris Sheard (Mark) most recently took the stage in Profiles Theatre’s production of COCK. Other Chicago credits include SS! MACBETH and SS! ROMEO AND JULIET (Chicago Shakespeare Theatre) and A CHRISTMAS CAROL (Metropolis PAC). Regionally, he appeared in: a staged reading of BOY by Anna Ziegler (Ensemble Studio Theatre in NYC); ROMEO AND JULIET, THE SEAGULL, MUCH ADO ABOUT NOTHING, LES LIAISONS DANGEREUSES, ANTONY AND CLEOPATRA, HAMLET, SKYLIGHT and TROILUS AND CRESSIDA (American Players Theatre); and two summers with the Great River Shakespeare Festival. He received his BA from Florida State University and his MFA from The University of Illinois PATP.

Robert Spencer (Mr. Abramson). In 1957, at the age of 19, Robert moved to New York to pursue a career on Broadway where he appeared in the original Broadway cast of BYE BYE, BIRDIE as well as ENTER LAUGHING, VIA GALACTICA and SEXTET and Off Broadway in THE FANTASTICKS, SING MUSE and THE MANHATTAN ARRANGEMENT. Spencer is originally from Chicago and has acted and directed at regional theaters throughout the country, including 14 seasons at American Players Theatre in Spring Green, Wisconsin.

THINGS YOU SHOULDN’T SAY PAST MIDNIGHT

Windy City Playhouse is a new theater at 3014 West Irving Park Road. Opened in March 2015, the Playhouse is a professional theater meant to entertain through exceptional contemporary, relevant and approachable art. Combining relatable material with high quality artistry, Windy City Playhouse seeks to create work accessible by audiences of all kinds. With a full service bar and light food, the Playhouse is not a traditional theater, rather a fun, relaxing and entertaining environment. With amenities such as optional armchair seating, the Playhouse is designed as a space for audiences to linger before and after the performance—a place to decompress with art.